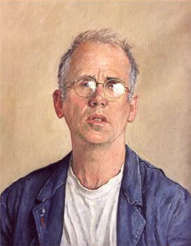 British postwar & contemporary painter born in 1947, John Whittall studied at Camberwell School of Art and Crafts and the Royal Academy Schools. His work encompasses portraiture, still life and landscape. Whittall has works in permanent collections in the National Portrait Gallery and Westminster Abbey.

“Leaving art school I remember a tutor asking me what I planned to do, “Paint” I replied and that’s been my life ever since. To be honest it hasn’t been easy but that sense of excitement whenever I face a new subject has never left meand I still regard myself as on a journey of discovery.” “My work is concerned with honest observation. I endeavour to interpret what I see as true to nature as possible. Corot said , “Beauty in art is truth bathed in an impression received from nature.””

It was thanks to the foresight and the critical eye of the headmaster at Fossdene Secondary School in 1963 that John Whittall was given the opportunity to attend Camberwell Art School once a week for life drawing classes. He was sixteen years old and this provided the experience and foundation for him to enter the school as a pre- diploma student two years later. He also attended The Royal Academy Schools under the teaching of Peter Greenham and Tony Eyton.

John’s works of interiors and life drawings reflect the joyous hours spent in life classes under the tutelage of Francis Hoyland, Dick Lee, and ultimately his biggest guide and mentor, Euan Uglow. The latter was constantly checking that John didn’t waver in sound observation and accuracy and instilled in him the energy and enthusiasm to drive him on.

John enjoys the essential process of keen observation and interpretation. Jean-Baptiste Camille Corot, his major influence, once said “be guided by feeling alone. We are only simple mortals, subject to error; so listen to the advice of others, but follow what you understand and can unite in your own feeling. Be firm, be meek, but follow your own convictions. It is better to be nothing than an echo of other painters. Beauty in art is truth bathed in an impression received from nature.”

It was Sir Brinsley Ford, one of the 20th Century’s great collectors and connoisseurs, who saw John Whittall’s promise – and quietly brought him to the attention of other similar like-minded collectors. His work is many private collections in the UK and abroad as well as in The National Portrait Gallery, Westminster Abbey, the Walpole Society Collection, and the Courtauld Institute. He has painted portraits for Sir Kenneth Cork (National Portrait Gallery), Lord Henry Benson (National Portrait Gallery), Sir Brinsley Ford Collection (Courtauld Institute), Sir Francis & Lady Dashwood, The Very Reverend Dr. Edward Carpenter (Dean) Westminster Abbey, Pipe Major Gavin Stoddart Royal Highland Fusiliers, Dame Elizabeth Lane, Mr. & Mrs. John Weston & Family, Lord Lloyd of Berwick, Lord Robert Blake, Lord Cochrane of Cults, Marquis & Marquise Hugues du
Rouret, Isabelle Isenschmid. He has taken part in many exhibitions in London and other parts of the UK and has won many art prizes for his work.

John Whittall’s paintings reflect his dedication and continuous striving for perfection in his depiction of exquisitely executed still lives and landscapes – his still lives are fresh and intense making you want to reach out and touch the subject matter and his landscapes and skies capture the all encompassing peacefullness of nature, reminding us of those lovely walks in parks or along the coast.

As described by Art Critic, Brian Sewell, John Whittall “has remained loyal to the traditions of the painter and has never abandoned the low technology of putting paint on canvas. I was not alone in my conviction that, though he might never achieve the notoriety of Hockney or Hodgkin, here was a painter who would paint until his dying day. Sir Brinsley Ford, one of this century’s few great connoisseurs and collectors, saw the promise too, bought his pictures, and in his quiet way brought him to the notice of other private collectors of the same high seriousness.” He so rightly concludes that Whittall’s paintings “are images with which to live in peace as they become old friends.” 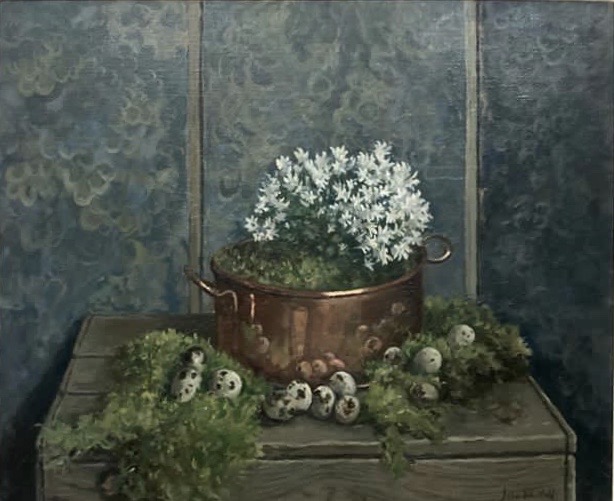 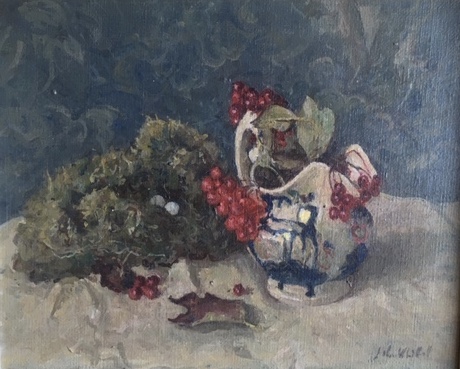 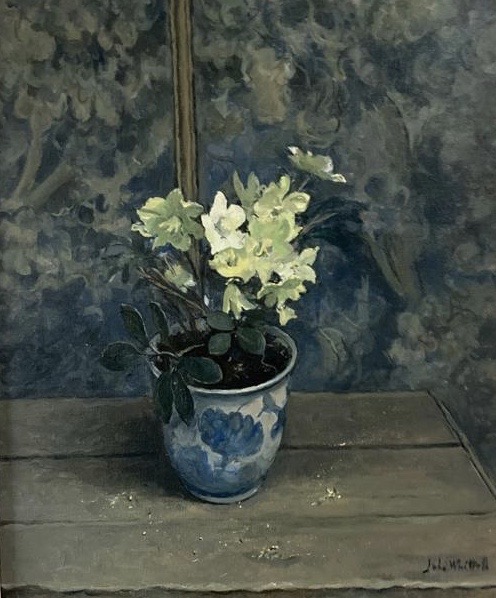 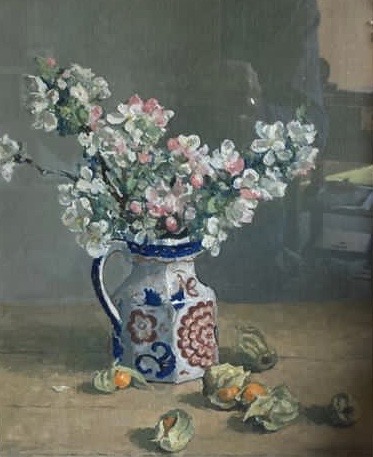 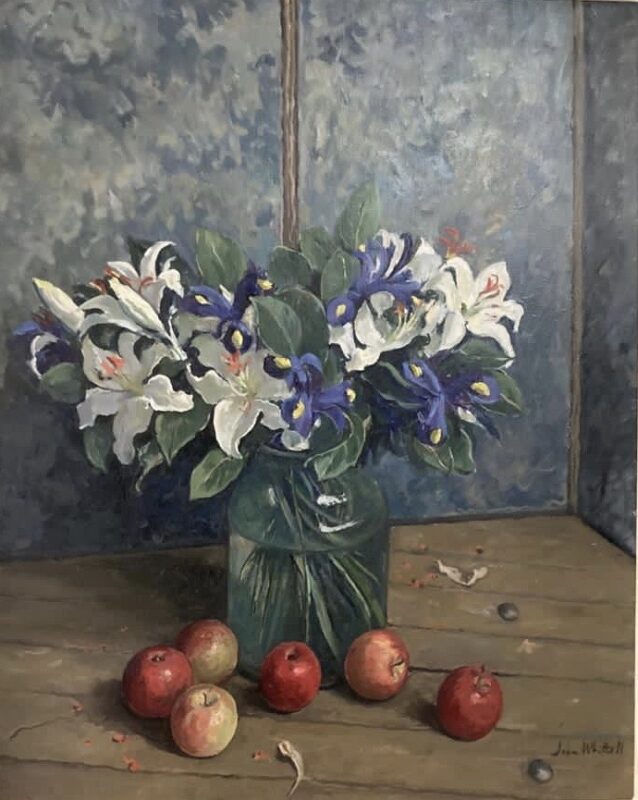 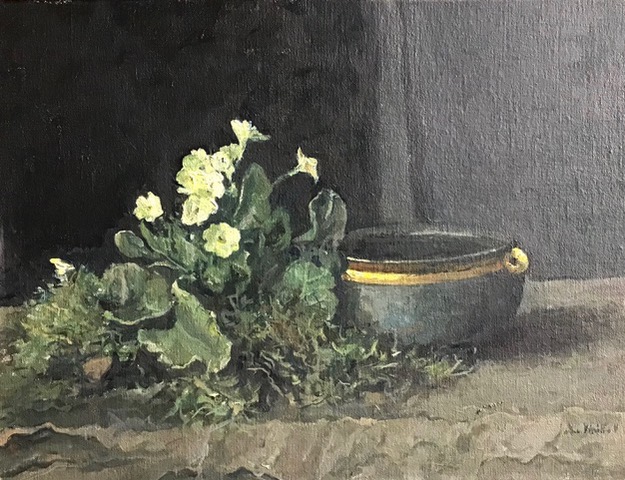 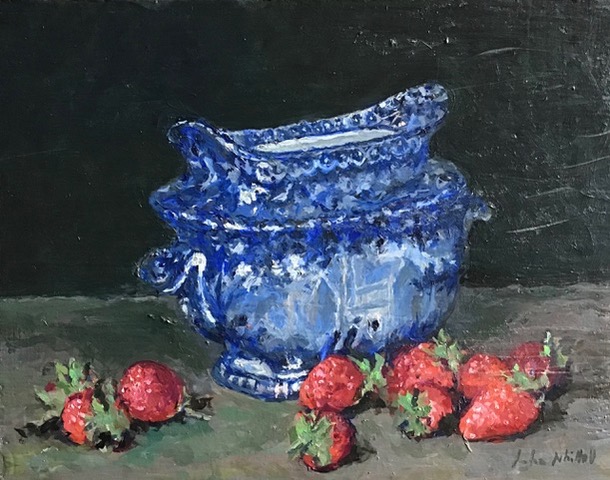 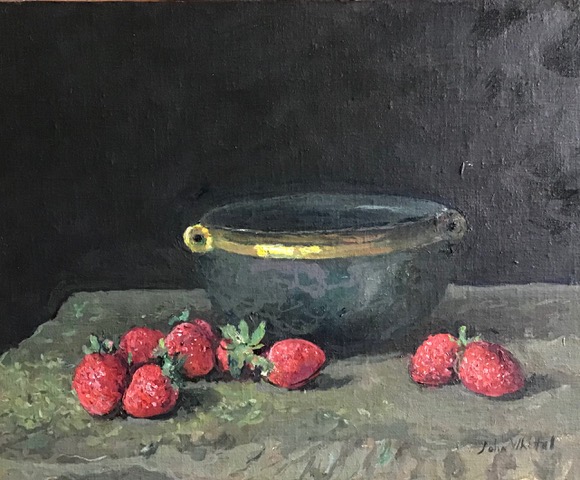